Re-Release in 2017! We have re-edited With Good Behavior (Conduct #1), book one of a complete romantic suspense trilogy.

In the midst of organized crime and dim hopes of redemption, can love persevere? For Sophie Taylor, a psychologist who lost everything when she violated an ethical boundary, and Grant Madsen, a naval officer who sacrificed himself to protect his uncle, finding that love seems unlikely.

As they start their lives over in Chicago, both fight family influences and run as fast as they can to escape the past. When their paths cross outside their parole officer’s door, attraction sparks. Too bad a hidden connection may not only shatter their fledgling love, but prove deadly to them both.

Re-Release reviews of a favorite book with one of my most adored heroes. Get lost in this sweet romance, a great beach read, pool read, couch read…wherever, and for only $0.99, worth every penny!! 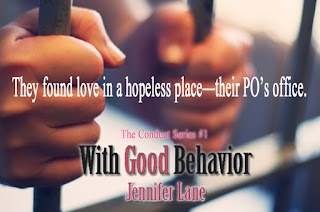 With Good Behavior is an extremely well-written engaging book. It has one of the sweetest heroes I’ve ever encountered, Grant Madsen. He’s honorable, charming, emotional, and so sexy. He meets the delightful Sophie while visiting his parole officer. She’s a complete stranger to him and yet he offers her comfort in his arms. He had me at that first hug. As the two of them get to know one another, they tell each other about the circumstances and betrayal that sent them to prison, and you feel their hurt and shame right along with them. I never rooted more for a couple than I did for these two.

Little by little we find out about Grant, his family and the tragic events from his childhood that continue to torment him and cause him so much emotional pain. Early on it’s also revealed to the reader how Sophie and Grant are intertwined, but yet when they find out, their shocked reaction made me anxious as to the future of their relationship. What ensues after that when a family member of Grant’s tries to right the wrong, brought me to tears and left me with an aching heart.

Jennifer Lane had me feeling emotionally stressed, but she also made me laugh. There is an amusing ensemble of characters that held the spotlight from time to time. Parole Officer Jerry Stone and ship captain Roger Eaton gave plenty of grief to Grant and Sophie. They always had a wisecrack about the couple’s relationship, but you knew that they wanted nothing more than for those two to find happiness and love. Always lurking in the background was Grant’s family trying to drag him down again.

The book also had some nice heat to it, although the writing in the first sex scene felt somewhat awkward. It seemed like the author was as nervous about writing that scene, as Grant and Sophie were about having sex for the first time. From there on out though, their encounters were nicely written, smooth, passionate and I was pleasantly surprised. Perhaps one of the most sensual moments was when Grant dressed… not undressed…yes, dressed Sophie. Oh, my Grant, you can come put my clothes on me any day, and then take it off again…talk about fun!!

If you are looking for a unique romance that will stir all your emotions, is suspenseful, and has characters that feel real and relatable…this is the book for you.

4.5 Stars! I was grinning like a fool by the time I turned the last page…again!

Once again these two stole my heart and it was wonderful to revisit with Grant and Sophie as well as the host of  wonderful secondary characters that make this story truly unique. I can’t recall any book with a similar plot, two cons meeting and falling in love. It’s not your typical cookie cutter romance and that’s what makes it so special!

Grant is still one of my top book boyfriends! He’s not what I would consider an alpha male, yet he’s extremely protective, honorable and I just adore him. Sophie is a wonderful endearing heroine. She sees the good in Grant and falls hard for him. When you read the twist in the plot, and what unknowingly connects them, you have to wonder how these two will ever get past it. But no matter how many times they are knocked down they continue to persevere, especially Grant. He suffers through an overwhelming loss and my heart broke right along with his. Sometimes it felt like he would never escape his family or his past.

The overall plot, charming characters, and the dressing scene (so sexy) were something I never forgot…and that’s saying something, especially considering how many books I’ve read over the past 6 years! Some books just hold onto to your heart and never let go, and With Good Behavior is one of those books for me! My re-read was just as special as the first go around and now I need to spend more time with Sophie and Grant, so it’s on to the 2nd book in the series, Bad Behavior! 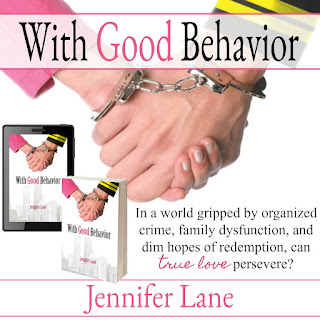 Get psyched for romance with psychologist/author (psycho author) Jennifer Lane! By day she’s a therapist, and by night she’s a writer. She can’t decide which is more fun.

Jen loves to create sporty heroines and hot heroes in her college sport romances. Volleyball wonder Lucia Ramirez finds her love match in Blocked despite the glaring political spotlight aimed on her family. In Aced, the second book in the Blocked series, it’s her brother Alejandro’s turn to get lucky in love. Spiked (Blocked #3) features Lucia’s younger brother, Mateo, and completes the series.

Stories of redemption interest Jen the most, especially the healing power of love. She is also the author of The Conduct Series, a romantic-suspense trilogy that includes With Good Behavior, Bad Behavior, and On Best Behavior. Her current project is a psychological thriller, Twin Sacrifice.

Ultimately, whether writing or reading, Jen loves stories that make her laugh and cry. In her spare time she enjoys exercising, attending book club, and visiting her sisters in Chicago and Hilton Head.

Fantastic review my friend!! Added to my Mt. TBR!

Karla, to hear that this book holds onto your heart means a lot to me! Thanks so much for reviewing not once, but twice.

I thoroughly enjoyed revisiting with these amazing characters. It’s just one of those books you never forget! Thanks Jennifer.