Gavin St. James, Earl of Thorne, is a notorious Highlander and an unrelenting Lothario who uses his slightly menacing charm to get what he wants—including too many women married to other men. But now, Gavin wants to put his shady past behind him...more or less. When a fiery lass who is the heiress to the land he wishes to possess drops into his lap, he sees a perfectly delicious opportunity...

A marriage most convenient

Samantha Masters has come back to Scotland, in a pair of trousers, and with a whole world of dangerous secrets from her time spent in the Wild West trailing behind her. Her only hope of protection is to marry—and to do so quickly. Gavin is only too willing to provide that service for someone he finds so disturbingly irresistible. But even as danger approaches, what begins as a scandalous proposition slowly turns into an all-consuming passion. And Gavin discovers that he will do whatever is necessary to keep the woman he has claimed as his own... 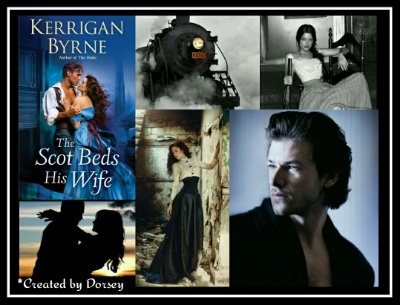 Gavin St. James (Mackenzie), Earl of Thorn, is a beautiful but troubled and broken man. He’s trapped in a life he hates, struggling to get things that he thinks will bring him the happiness and status he craves. He is the youngest son of the hated and loathed Laird Hamish Mackenzie. The former Laird was a cruel and evil man who damaged everyone within his path including his children, as we learned in The Highlander. Gavin and his beloved mother were damaged deeply at his father’s hand and sadly he has troubled relationships with his half-brothers.

Samantha Masters is a woman who was orphaned at an early age and suffered from neglect. Sam made the bad decision to marry young a man she barely knew to escape the life her guardians had mapped out for her. She married an outlaw who robs trains, during their latest train robbery, things go terribly wrong and to save an innocent woman she kills her husband. Now she must flee from the law and her husband’s vengeance-seeking brothers.

The women she saves turns out to be a Scottish heiress and offers her a way out. She sends her to Scotland to act as the heiress and claim the land she herself doesn’t want, but, if she doesn’t claim what is rightfully hers, it will end up in Mackenzie hands, which is unacceptable since Hamish Mackenzie killed her father when she was a child.

Gavin and Sam both have demon’s and need to learn how to trust. It was fun watching them skirt around each other, butt heads, and try to avoid their growing attraction. They are very suspicious of each other yet their relationship just flowed so effortlessly from enemies to friends to lovers in love.

We get a great cast of secondary characters you’re going to fall in love with. They fill the story with warmth, good humor, companionship, friendship, and love. Kerrigan Byrne gave us a glimpse into what may be the next couple of books in the series and I can’t wait for more Victorian Rebels!!!

This book can be read as a stand-alone but I highly recommend reading prior books in the series, since previous characters are part of the story, you’ll understand the dynamics and have a better understanding having read the others. Plus, they’re all excellent reads so you’ll not be disappointed.

Kerrigan has done many things to pay the bills, from law enforcement to belly dance instructor. Now she’s finally able to have the career she’d decided upon at thirteen when she announced to her very skeptical family that she was going to “grow up to be a romance novelist.” Whether she’s writing about Celtic Druids, Victorian bad boys, or brash Irish FBI Agents, Kerrigan uses her borderline-obsessive passion for history, her extensive Celtic ancestry, and her love of Shakespeare in almost every story.

Her first novel with St. Martin’s Press, THE HIGHWAYMAN, is available now, followed by THE HUNTER. Her newest Victorian Rebel’s Release of THE HIGHLANDER is available August 2nd, 2016.

She lives at the base of the Rocky Mountains with her handsome husband and three lovely teenage girls, but dreams of settling on the Pacific Coast.

This was a good read! Glad you enjoyed it!

What a wonderful review you have here. I adored this book too, and even though the heroine wasn’t my favorite….the romance was fabulous to read. It had some interesting dynamics.

Thanks! I completely agree, definitely some interesting dynamics in this one, can’t wait for more. Thanks for stopping by and commenting!